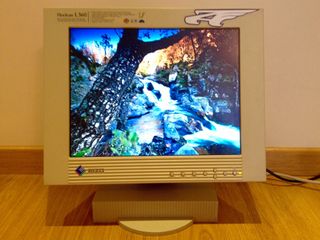 LCD monitors, unlike most other desktop hardware, have become more expensive because of fluctuating markets. Image quality varied even more than price. 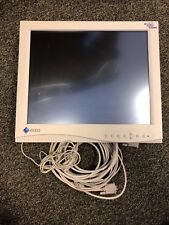 Some monitors looked so dim they would be difficult to see in a standard fluorescent-lit work environment. To compensate, some monitors could be set so bright that color definition was washed out.

EIZO FlexScan L360 the top of the group, Apple Computer Inc. The latest Studio Display, which works with both PCs and Apple computers, stood out for its excellent color depth and its on-board controls, which were the most elaborate of the monitors reviewed.

They could control brightness, contrast and white point balance, meaning the already excellent color depth could be tweaked to suit any user. Of all 10 monitors, the Studio Display was the most pleasing to look at for long periods, and it easily earned a EIZO FlexScan L360 Choice designation.

It also had the best-built monitor stand, with a spring mechanism to counter the unit's weight. The monitor could tilt horizontally. Although the stand had a large footprint, a special attachment framed the monitor like a picture, ingeniously matching the footprint to the size of the EIZO FlexScan L360. It was wider than that of most LCDs but fell substantially below the advertised degrees. At about degrees off-center, the image became unreadable in a EIZO FlexScan L360 office environment.

Another strong performer, the ViewSonic Corp. VP, had the best brightness of any display. The screen was easy to read in any lighting'even when direct sunlight streamed onto it. Bright EIZO FlexScan L360 Amazingly, the superior brightness EIZO FlexScan L360 not come at the expense of color depth. The VP's standard brightness setting was perfect for most applications, and photographs and images looked clear and realistic without obvious dithering. Photographs had none of the color swirling seen on some other LCDs.

The unit's large footprint of almost 11 inches was somewhat less than that of a similar-sized CRT. The VP's impressive performance earned it the other Reviewer's Choice designation in the review. A surprise performer, Korea Data Systems' VS F, was the lightest and smallest in the group but a heavyweight champ in performance. It showed once again that looks can be deceiving. At first glance, it appeared to have no controls; they were hidden in the back. Nor was a software driver disk included, which ordinarily would reduce the product's score, but the F really needed no extra controls. The standard driver produced clear images nearly as bright as those of the two top performers.

The only problem was that black and dark colors tended to wash out slightly at higher brightness settings. Disk is it The F did, however, come with a tune-up disk. When I inserted the floppy and ran the program, it tested the monitor for about 30 seconds and then set the default EIZO FlexScan L360 for brightness, contrast and refresh rate to their optimum settings. It did a great job of figuring out the settings, making setup a breeze.

The power cord and VGA umbilical cord were combined, which meant less cable spaghetti lying around. Conversely, the combined cord might make it more difficult to get the monitor working, but such design features are unexpected in an inexpensive analog LCD. The NEC shone in performance. It had a nearly degree viewing angle, and text was easy to read well beyond the EIZO FlexScan L360 degrees. EIZO FlexScan L360 were in a spot that made them difficult to attach, so setup was not as easy as for the other monitors. But its performance was like sailing a yacht with the anchor dragging. The PanoView had the lowest brightness of any unit tested.

Even cranked up to the highest setting, it was difficult EIZO FlexScan L360 read text with overhead lights on. Darkening the room helped, but few workers can turn off the lights whenever they have to read an e-mail. The 's large desktop stand could not adjust vertically, and the monitor failed to clear its own base when it was rotated 90 degrees, so the corners got stuck.

EIZO FlexScan L360 could be tilted up a good distance and then rotated successfully, but most users will likely end up banging the LCD against the stand a few times. On the bright side, the monitor had a neardegree viewing angle, or about 90 degrees when tilted vertically.

Users who want all the bells and whistles can go with the for enhanced performance place EIZO's LCD line-up at the forefront of the For adaptability to a variety of environments, EIZO is introducing the new L (15"). FlexScan, EIZO FlexScan L360 and EIZO are registered trademarks of EIZO NANAO . Before connecting your PC to the L LCD monitor, change the display.