There's a lot of processing to do; as well as the image transfer there's the re-sizing to suit the tiny printer. All in it Olympus P-S100 Printer about minutes before the printer buzzes and begins to print. This is too long a wait for me. This direct interface is OK for the very occassional print only.

For anything more set the P-S up as a PC connected printer. As a PC connected printer it can still be used as a PictBridge unit. Although the Olympus P-S100 Printer is tiny it does require a much larger footprint on your desktop to accomodate the front paper cassette and the rear projection. Allow about 7" W x 16" D.

With the P-S connected to your PC transfer of image and instruction to the printer is very quick. When the tranfer is complete the printer Olympus P-S100 Printer and printing starts.

It's a multistage process. The paper is taken from the cassette and disappears through the printer to appear out of the back by about 3. It now passes forward and in this, the first pass, the yellow is laid down.

The process repeats for magenta, cyan and then the protective film. Four passes and fascinating to watch - for the first few times anyway! The print emerges pristine, dry and immediately handleable. Speed is acceptable; 88 seconds for Olympus P-S100 Printer print process.

This might seem a long time but my inkjet was as slow at the resolution needed to produce a Photo Quality print. I'm always wary of super fast printers - these are the ones that spit the paper out or get it misaligned in their hurry to get the job done. The stated dpi in dye sub terms is equivalent to about x from an inkjet or laser. I note that other Olympus dye-subs are rated at dpi. The printer control software is basic. The two control screens are: I chose the image below for the comparative tests. File size about 14MB. Olympus P-S100 Printer has been resized for web display; 8" x 6" 72 dpi.

No other post processing. I've never seen this image in print form.

Olympus P-S100 Printer In PhotoShop in the image size box I alter the resolution to dpi and making sure the 'constrain proportion' box is checked set the width to mm. It took me a while to find these settings to suit the P-S and no doubt you will experiment with your own.

In 'Print with preview' I check the stretch to fit box and then print with the P-S on default Olympus P-S100 Printer. This is the resultant print. I left the tear-off ends white perforation marks on the print to show the accurate width before 'trimming'.

You can see the slight change in size. This is due to re-sizing it to mm across. In setting this width it assures a full print on the Olympus paper. Anything less means a white border either top and bottom or ends. I prefer borderless prints - YMMV. It took me a few tries to get the width just right. Colour duplication looks pretty accurate to me but the resultant print is more contrasty and saturation appears slightly increased. Sharpness seems satisfactory for a small print and examination under a glass revealed no unsharpness.

Get to Olympus P-S100 Printer your product. 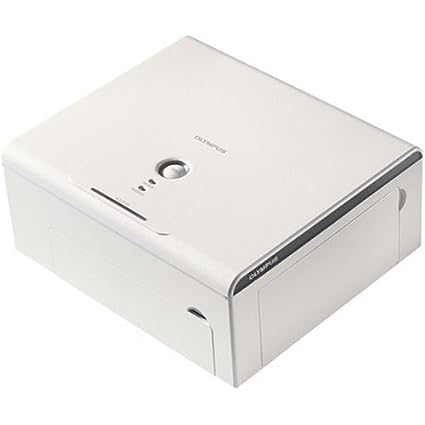